MEET THE PASLAY FAMILY: Rest Your Soul in that Alone 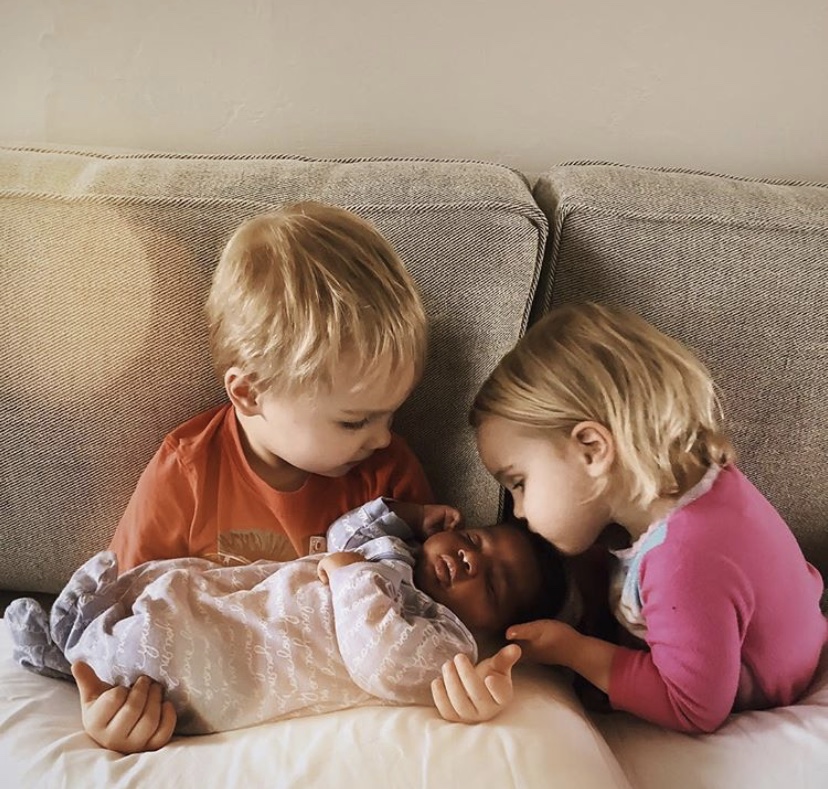 Meet Taylor Paslay: she and her husband applied for our #ADOPTWITHFTN, won the contest, and found their adoption fully funded!

How did you hear about the #ADOPTWITHFTN contest, and what led you to apply?

Our friends had entered the year prior and wound up coming in second place! They had received a “Don’t Waste Today” t-shirt and posted about this years contest and really encouraged us to enter knowing our situation! It was really almost do or die, and we made the choice at that moment that if we were going to enter something like this that we would go big or go home, because our little guy was due in a matter of weeks - little did we know that he would be born during the contest!

You and your husband sold hundreds of shirts in just a few days.

What do you think led to your success?

We really tried to network the best we could in hopes that we would reach people who shared a heart for adoption! We reached out to our local news station who covered a story and provided a link on their website, we called our local Christian radio, we had all of our friends and family share, my work place popped in, and we had several small businesses offer products to their clients in return for “votes/shirt purchases”.

Ultimately what really helped us was caving in, printing over 200 flyers about our story, and my husband went door to door all day Saturday and Sunday. We brought along a tablet and helped people order right then and there, and we got to hear a lot of amazing stories from people who live by us whose hearts were touched by adoption! Many bought for their whole family or even friend they had!

Can you describe what it felt like to find out that you had won the contest and that your adoption of your son would be fully funded?

Oh gosh, that day was a very long and trying day for us. On Monday night I received a call saying, “We learned baby was born yesterday, and we don’t know what is going on”. I remember just sinking; we had been through two failed adoptions, and the calls often go like this. I remember just calling AJ and crying and saying that it was happening again, and he was the one who told me to get up, shake it off, and get there. So Tuesday (also the last day of the contest) I traveled to Oklahoma City to discover that paperwork was missing, a judge was out of town, DHS was at the hospital, mom was on a lock down and not allowed to speak to us, and I had nothing else to do but sit in an empty hotel room with all of this baby boy stuff and wait it out until the morning.

Knowing I would be absent for the last day of the contest made me nervous, but our village showed up and stepped in my place and kept things going, knowing we were struggling.

Come Wednesday, I knew it would likely be one of the longest days of my life, and off our lawyer and I went to go see a judge, fight DHS, handle hospital social workers, and fight for our boy. All in that day we got confirmation that he was ours, and that we had won the contest. Talk about a day! I’m not sure that words exist that will accurately describe the emotion behind learning that our adoption had not failed and that it was paid for; we were happy, humbled, blown away, and overcome with grace.

What did this experience teach you about the Lord?

I remember being in the trenches of our adoption, being adopted myself this was a life long dream that continuously fell apart. So many things had to happen to get us to our boy, and each time we had something fall through. Each time we had to hand a baby back, our village would constantly say, “You’ll see, God has a plan”, and if I am being honest, each time our hearts were broken that plan seemed further and further away.

It seemed against the character of the Lord that I knew to have put us through so many years of loss and pain, four babies were lost to us and our arms ached so badly, I remember telling my husband that I just wanted Him to show up... that I just wanted some sort of confirmation that He was still here and that He was still fighting this battle for us. The Lord speaks to us often times in numbers, and when we were previously matched with a little girl, I remember asking everyone when they thought she would be born, and my son guessed the 9th which so happened to be the anniversary of when we lost a baby though pregnancy. I prayed for God to give me a sign, and sure enough.. I got nothin'! I laughed and started to clean the house when I flipped over a paper with a big 10 on it that my son had drawn - so therefore that was the divine sign I felt I needed! Sure enough on the 9th we learned that she had been born, and on the 10th we learned our adoption had failed. It was like he was rubbing salt in a deep wound, it seemed cruel and unfair.

My heart still yearns for that baby girl, and I mourned harder for her than ever before - but what an awkward grief, somewhere between immense JOY that a family got to stay together and horrible pity that somehow your family fell apart, you were grieving a child who never died.

A few days later I was crying and praying and begging for something, anything that could keep me going, and again I got nothin'! So per usual, I started cleaning and flipped over a piece of paper where my son had written a huge 8! To keep myself accountable, in case it ever meant something and so people didn’t think I was nuts, I hopped on social media and did a live video saying I had no clue what 8 meant, but it had to mean something. Sure enough, our son was due exactly 8 weeks later on December 8th, eight days after seeing that paper I got a call telling me about a little boy. That little boy was released from the NICU on December 8th, which was the same day, 25 years prior, that I was released from the hospital and adopted.

On December 24th we were cleared to go home with our child, on the anniversary of our second pregnancy loss. God heals. I could sit here and type all day that “the Lord has a plan!” But I remember that being one of the last things I really wanted to hear in those hard moments of the wait.

Instead I will tell you that faith is hard, and sometimes it hurts, but our God lives in the future, and He has fought it for us already - rest your soul in that alone. While you are hurting today, He is busy in your tomorrow, and the worldly pain that we experience does not compare to what He is working out for us. I learned that it’s OKAY to hurt, it’s OKAY to be upset, it’s OKAY to not be okay; the God who formed your heart knows how it is feeling even if you don’t want to say it. But if anything I learned that even when it’s not good, He is good. Your faith, your constant standing back up and putting a bandaid on your bruises will pay off, don’t let the enemy convince you of our God’s absence, He does not deserve any part of your journey - own it!

What advice do you have for someone who feels called to adopt but is scared of the financial commitment that comes with adoption?

This is coming from someone who can’t financially commit to a new pair of shoes. Finances was absolutely the last thing my husband and I gave to the Lord when we decided to commit our lives to him. Why? Because it is the hardest. Because without it we can hurt tremendously. Everyone kept encouraging us to believe that if this was God’s will that He would take care of it. We went through the waves of belief and shock and fear but that’s all a part of the process, overcoming that is necessary.

Clearly our story ended in our adoption being fully funded the week that our son was born after the large financial loss of two failed adoptions, and if that isn’t the largest show of what the Lord is capable of I’m not sure what is. But I would like to answer this question as an adoptee because whenever I hear people say they “wish they could adopt but it is too expensive” my heart shatters. My parents went through seven years of infertility, so many procedures and trying this or trying that and the medical bills were stacked up well over their heads. They met my birth mother at the OBGYN, and they had a choice, and if they hadn’t chosen to believe that God would provide I wouldn’t be here talking to you now. My life would look different, I wouldn’t have had the many opportunities that I do, I wouldn’t have met my husband or had my kids… their faith changed my life. Sit on that. There is a child out there in this world, here or about to be, that will depend on your pain and persistence. A Childs entire life will depend on you believing that God has already handled this. If we think God is smaller than the amount of money it will take to bring your child home you have put the Lord into a small box that he doesn’t belong in, and he is yearning at the opportunity to show you just how big he can be. Our God writes stories, these stories are worth telling and shouting from the roof tops, they are extravagant and unbelievable just like His grace! Think about the Bible, note that everyone He used in the Bible to tell the story of our salvation was someone you would never expect, these people were outcasts, underdogs, sinners, people who gave every penny up to follow Him, and in return He blessed that. Allow Him to bess you, keep you eyes focused on the life that you will change but more importantly keep your eyes focused on the change this child will bring into your life. If God put this in your heart, He will see it through. So rather than spending your life wondering if He would have, let Him show you how He will. He will write you a story worth sharing.