Meet Audie: Encouraging Others to Praise Him in the Waiting 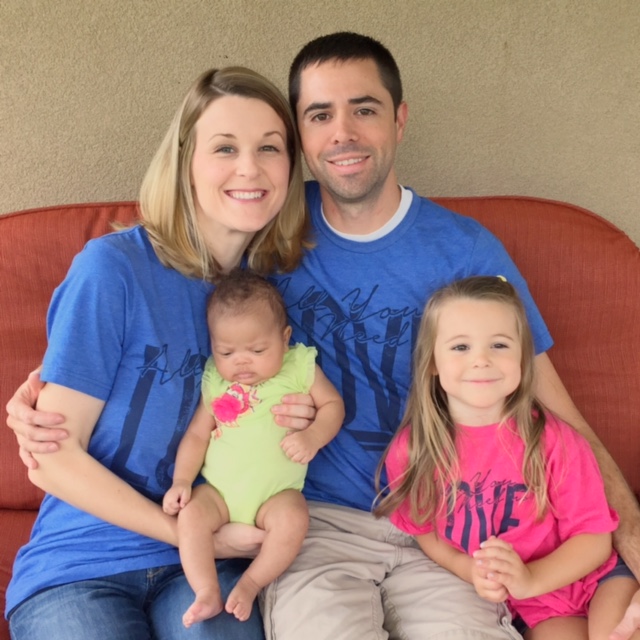 Meet Audie Woods, mother to two who believes that obeying the Lord is the most important part of the adoption process and that there's purpose in the waiting that often accompanies adoption.

Did you always know you wanted to adopt? If not, when did you make that decision?

Before and very early in our marriage, we talked about adoption. We had both been on short-term international trips where we volunteered at orphanages, and those trips softened our hearts toward the need for adoption. Initially, Aaron was a little more eager to adopt than I was. I was definitely interested but had lots of questions and didn't want to rush into it. After praying and talking together, we came to the agreement that at some point in growing our family we would likely do so through adoption. In order to learn more about adoption and the different kinds of adoption, we attended an adoption class hosted by our church. During that class, we learned that most adoption agencies wanted at least three years of marriage before adopting. This class confirmed our desire to adopt, but the length of marriage requirement caused us to wait in starting the process. After the birth of our first daughter, we experienced a few years of infertility and a miscarriage. Although we felt the call to adopt early in our marriage, we did not pursue adoption until almost 5 years into our marriage. After 3 years of praying and waiting on God’s timing, we felt the Lord telling us to move forward in beginning the adoption process and assuring us that He would be faithful to open and close doors as He saw fit. The Lord was very good in putting Aaron and I on the same page and answering our prayers.

The two of you felt called to adopt several years before your daughter joined your family. What did you learn during this season of waiting?

We learned to depend on God and seek His will through prayer and Bible study. We also learned the importance of being content with what God had given us and where He had us and to focus on the responsibilities and roles He’d given us to fulfill at that particular time (i.e.: serving one another, parenting our biological daughter, serving the church, etc…).  In other words, we learned to focus on what God had blessed us with instead of what He’d not allowed us to have. And in the times of questioning or disappointment, we learned to cast our cares and discouragement at the foot of the cross. God is big enough to field our concerns and to meet us where we are. The importance of being involved in our local, Bible-believing church was also highlighted during our time of waiting. It was and continues to be a tremendous blessing. We were able to get to know other adoptive families, some of which are transracial. Getting to know families who have already walked through the adoption process has been a gift and a great source of encouragement. I think one of the best things you can do, whether you’re waiting on the Lord or just walking through life, is to become active in a local body of believers.

How has growing your family through adoption affected your family dynamic, just not your immediate family but your extended family as well?

By God’s grace alone through much prayer, it has been a pretty easy transition for our family and one that has brought great joy. Both sides of our families were supportive and enthusiastic throughout the whole process. Growing our family through adoption has opened the door for us to be able to regularly share with our oldest daughter God’s plan for the family and adoption through Jesus Christ, as well as the different ways God grows families. We all had the adjustment of adding another family member, but the struggles that we encountered had more to do with the fact that our new family member was an infant and not with the fact that she is adopted. Thankfully, our extended family has accepted our adopted daughter as nothing more or less than our daughter, and it has been a blessing of a smooth transition.

How would you encourage other families wanting to adopt transracially? What have you learned through your experience?

If we can do it, you can do it. I truly believe that any couple that loves the Lord has the ability to be great parents of a child who doesn't look like them because it is the God we serve who equips us. Transracial adoption is not for everyone, but I believe that it is for anyone that God calls to it. I believe it is vitally important to understand that your child's skin tone literally plays no part at all in the amount of love God has for them or you, and it will play no part in how much you love them. Creator God beautifully made them in His image. Don't be (or say you're) colorblind. Accept and acknowledge their skin tone and differences. Value and treasure them. I think the biggest thing I have learned is that the fears beforehand go away so quickly when you're holding your new child in your arms. Yes, difficulties will still come, but they are quickly overshadowed by the great joy of having a new child.

What would you say to someone who feels called to adopt, but the timing just doesn’t seem right?

Obey God. There's not always a visible sign from heaven marking the perfect time to begin the process. There is the clear work and leadership of the Holy Spirit. He will open and close doors according to His timing and plan. If He calls you to adopt, prayerfully make a plan and move forward until He says STOP. If He stops the process, prayerfully pursue Him in the waiting and continue to revisit adoption. The stopping points and seasons of waiting wherever we are in the adoption process are times for God to refine us and prepare us along the way and to reveal more of Himself to us. If you are married, I encourage you to pray for God to align your desire to adopt with your spouse’s and that your hearts would be aligned with His will. All three of you need to be in sync in this very important decision-making process.